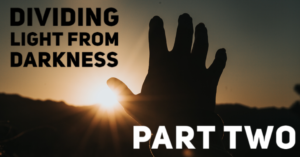 Then God said, “Let there be light”; and there was light. (Genesis 1:3 NKJV) Here, the word God is Elohim in Hebrew, a masculine plural noun meaning the Supreme God. We know God created the heavens and the earth in Genesis 1:1 and we know the Spirit of God, also known as the Holy Spirit and the Holy Ghost, amongst other names, was thinking in Genesis 1:2, but this is the first time God speaking is recorded in the Bible.

It is believed by many, but not proven with certainty that David wrote Psalm 33. The authorship is not the point here, what is the point is the explanation of Genesis 1:1 as it pertains to God creating the heavens and the earth. Psalm 33:6, By the word of the Lord the heavens were made, And all the host of them by the breath of His mouth (NKJV). Lord is the proper name of the God of Israel, a masculine singular proper noun, indicating God is one being, yet, with the obvious reference to Genesis 1:1, the Lord is more than one member named Elohim.

“And all the host of them” is referring to Genesis 2:1, thus the heavens and the earth and all of them were finished (NKJV). Many think “the host of them” is the stars out in the sky, but the word “host” in Psalm 33:6 and first appearing in Genesis 2:1, is tsaba (Strong’s Hebrew 6635) and means a mass of persons organized for war or a campaign. This word “hosts” is also found in different variations in the book of Job. To look a little closer at Genesis 2:1, a person will notice the hosts are both in heaven and on earth. Just as angelic hosts were organized for a battle against satan, so are earthly hosts organized for a battle against satan, making up some of God’s army.

The word “appointed” fits into the narrative because the hosts were created by the time Genesis 2:1 happens, for each host to work in one’s own individual part in each’s appointed time, place or meeting. The Hebrew word for appointed is MOED and it appears first in Genesis 1:14, Then God said, Let there be lights in the firmament of the heavens to divide the day from the night; and let them be for signs and seasons and for days and years (NKJV). Here the word “lights” is MOAR (Strong’s Hebrew 3974) and means a luminous body, stars. This is day four of creation, when the stars appear.

The Greek word for appointed is prothesmia (Strong’s Greek 4287), meaning appointed before or a previously appointed time, and only occurs one time, in Galatians 4:2.

Now I say that the heir, as long as he is a child, does not differ at all from a slave, though he is master of all, but is under guardians and stewards until the time appointed by the father. Even so we, when we were children, were in bondage under the elements of the world. But when the fullness of the time had come, God sent forth His Son, born of a woman, born under the law, to redeem those who were under the law, that we might receive the adoption as sons. And because you are sons, God has sent forth the Spirit of His Son into your hearts, crying out, “Abba, Father!” Therefore you are no longer a slave but a son, and if a son, then an heir of God through Christ. (Galatians 4:1-7 NKJV)

Young’s Literal Translation is interesting, it translates Matthew 6:11 as ‘Our appointed bread give us to-day’ (YLT). Matthew 6:11 is part of the Lord’s Prayer, the theme of bringing forth our daily provision.

Psalm 33:6, “by the breath of His mouth.” (NKJV) The word mouth is peh in Hebrew (Strong’s Hebrew 6310) and first appears in the Bible in Genesis 4:11, “So now you are cursed from the earth, which has opened its mouth to receive your brother’s blood from your hand.” (NKJV) This is the Lord talking to Cain after Cain killed his brother Abel. The Hebrew word for Cain is Qayin (Strong’s Hebrew 7014). This same word as an improper noun is qayin (Strong’s Hebrew 7013) and occurs one time in the Bible, in 2 Samuel 21:16, and it means spear.

When the Philistines were at war again with Israel, David and his servants with him went down and fought against the Philistines, and David grew faint. Then Ishbi-Benob, who was one of the sons of the giant [Rapha], the weight of whose bronze spear was 300 shekels, who was bearing a new sword, thought he could kill David (2 Samuel 21:15-16 NKJV). When a word is in italics in the KJV and NKJV, that means it was not included in the original text, it was added by the translators to give emphasis or because there was no equivalent word from the original text. Here, sword is one such word period.

The other place a word is added after chardrash is Deuteronomy 32:17, They sacrificed to demons not to God, to gods they did not know two new [gods], new arrivals that your father’s did not fear (NKJV). Why was there no word after chadrash in these two places, both having to do with giants or false gods? What exactly is this new in both these instances? Are they the same thing?

Deuteronomy 32:15-18, “But Jeshurun grew fat and kicked; You grew fat, you grew thick, You are obese! Then he forsook God who made him, And scornfully esteemed the Rock of his salvation. They provoked Him to jealousy with foreign gods; With abominations they provoked Him to anger. They sacrificed to demons, not to God, To gods they did not know, To new gods, new arrivals That your fathers did not fear. Of the Rock who begot you, you are unmindful, And have forgotten the God who fathered you.” (NKJV)

The word Abel as a proper noun is Hebel (Strong’s Hebrew 1893), but the same word as an improper noun, hebel (Strong’s Hebrew 1892), means vapor or breath, and occurs 73 times in the Bible. Hebel can also mean vanity depending on the translation, and it is used to mean something that does not last very long, something that is easily replaced when something new comes along. The words breath, vapor, vanity and Idol are used interchangeably throughout different translations to mean basically the same thing as each other, depending on the emphasis of the word. For example, the New American Standard Bible (NASB), They have made Me jealous with [what] is not God; They have provoked Me to anger with their idols. (Deuteronomy 32:21). King James Version (KJV), They have moved Me to jealousy with [that which is] not God; they have provoked me to anger with their vanities (Deuteronomy 32:21).

Abel had become an Idol to Cain, with the demise of Able being at the forefront of Cain’s mind. All biological life on earth is but for a brief time, easily replaced by a new thing when the old thing has passed away. There was something new made; new idols, new gods, new members of the satanic army who continually rise up against God’s people with the aid of those earthly people who are just like Cain.