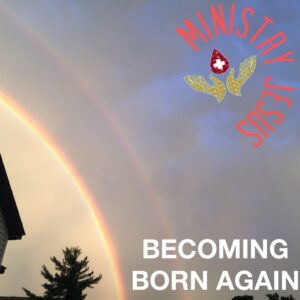 There was a man of the Pharisees named Nicodemus, a ruler of the Jews. (John 3:1)

Nicodemus was a Pharisee and a lawyer, a judge in the Jewish Sanhedrin, which was the Jewish Supreme Court, amongst other judiciary roles. Jesus was eventually put on trial before the Sanhedrin following His arrest in Jerusalem. Nicodemus, like all members of the Sanhedrin, only dealt with Jewish religious matters.

This man [Nicodemus] came to Jesus by night and said to Him, “Rabbi, we know that You are a teacher come from God; for no one can do these signs that You do unless God is with him.” (John 3:2)

Nicodemus was representing a divided sect, where some knew He came from God and others had doubts. Nicodemus knew all the Jewish scriptures and knew what was written about Messiah. Nicodemus meant something specific by saying, “God is with him,” as in the two verses below.

how God anointed Jesus of Nazareth with the Holy Spirit and with power, who went about doing good and healing all who were oppressed by the devil, for God was with Him. (Acts 10:38)

”And He who sent Me is with Me. The Father has not left Me alone, for I always do those things that please Him.” (John 8:29)

Jesus answered and said to him, “Most assuredly, I say to you, unless one is born again, he cannot see the kingdom of God.” (John 3:3)

31 And behold, you will conceive in your womb and bring forth a Son, and shall call His name Jesus. 32 He will be great, and will be called the Son of the Highest; and the Lord God will give Him the throne of His father David. 33 And He will reign over the house of Jacob forever, and of His kingdom there will be no end.”

35 And the angel answered and said to her, “The Holy Spirit will come upon you, and the power of the Highest will overshadow you; therefore, also, that Holy One who is to be born will be called the Son of God. (Luke 1)

All humans after creation are born of flesh, from a mother and father, with a sinful nature. To truly understand what it means to be born again, one must look to when mankind was created.

Then God said, “Let Us make man in Our image, according to Our likeness; let them have dominion over the fish of the sea, over the birds of the air, and over the cattle, over all the earth and over every creeping thing that creeps on the earth.” So God created man in His own image; in the image of God He created him; male and female He created them. (Genesis 1:26-27)

This is the book of the genealogy of Adam. In the day that God created man, He made him in the likeness of God. He created them male and female, and blessed them and called them Mankind in the day they were created. And Adam lived one hundred and thirty years, and begot a son in his own likeness, after his image, and named him Seth. (Genesis 5:1-3)

To be born again means to be born of the Holy Spirit, just like Adam was born of the Spirit and not born from a man and a woman.

And the Lord God formed man of the dust of the ground, and breathed into his nostrils the breath of life; and man became a living being. (Genesis 2:7)

Earth was created for us to live in and have dominion over. We were never meant to be brute beasts like the animals that co-inhabit this planet with us. All people born after creation are born as the beasts of the earth with self-preservation, as far as the urge to not die, being at the forefront of most people’s minds, all the while finding ways to satisfy the needs of the flesh.

Some secular people are spiritual, but, most of this spirituality is still geared toward fulfilling an innate desire to appease the flesh, with a focus on the person’s own spirit, and not a focus on the Holy Spirit.

Jesus answered, “Most assuredly, I say to you, unless one is born of water and the Spirit, he cannot enter the kingdom of God. (John 3:5)

Jesus is not saying baptism itself is a way to become born again, but, what Jesus is saying is the act of being immersed publicly, where witnesses are present, is the act of publicly acknowledging Jesus is Messiah, not coming to Jesus by night, hiding from the condemnation of other humans who do not believe, like Nicodemus is doing at this point in the ministry of Jesus.

Jesus said, “But whoever denies Me before men, him I will also deny before My Father who is in heaven.” (Matthew 10:33)

Being born of water was nothing new to Nicodemus. Any Gentile who wished to become a Jew could become a Jew through immersion in a Mikveh, a bath used for baptism. The person would renounce previous idol worship to become a follower of the God of Israel. All throughout Jewish scriptures, Jews were commanded to sprinkle with water, bathe or immerse in living water for redemption.

Nicodemus knew all the Jewish scriptures and all the Jewish laws, but, at this point,  he failed to admit his need to become born again. Jesus is who baptizes with the Holy Spirit, like changing a person’s stony heart, filled with water into a waterpot full of Good Wine. Jesus chose to turn not just any water into wine, but He chose to turn water from Jewish ceremonial hand washing waterpots into the good wine, foreshadowing a coming change.

Now there were set there six waterpots of stone, according to the manner of purification of the Jews, containing twenty or thirty gallons apiece. Jesus said to them, “Fill the waterpots with water.” And they filled them up to the brim. And He said to them, “Draw some out now, and take it to the master of the feast.” And they took it. When the master of the feast had tasted the water that was made wine, and did not know where it came from (but the servants who had drawn the water knew), the master of the feast called the bridegroom. And he said to him, “Every man at the beginning sets out the good wine, and when the guests have well drunk, then the inferior. You have kept the good wine until now!” (John 2:6-10)

Just like the master of the feast did not know where the good wine came from, so many of those who are religious leaders, focused on customs, do not understand the spiritual world of God we are born again into. Us servants know Jesus is where the good wine comes from, though we cannot know when or where the Holy Spirit will manifest. He will manifest within us who have become born again as the Spirit moves us.

The wind blows where it wishes, and you hear the sound of it, but cannot tell where it comes from and where it goes. So is everyone who is born of the Spirit.” (John 3:8)